Google Apps and The NFL

Are you ready for some FOOTBALL?!?!?! The football season is upon us and many of us are carefully hand-picking our fantasy football teams and brushing up on our trash talking before the season officially begins! Today, we are going to apply Google Apps to this great, rugged, American sport. You will see how Google Apps can benefit organizations that are constantly on the move and see how organizations can easily integrate themselves into the social world. We will show you how an organization like the NFL and all the dedicated followers can utilize Google Apps to maximize the TEAM experience!

How Can The NFL Benefit From Google Apps?

Put The Digital Playbook in Play!
Technology is creating a paradigm shift which is encouraging virtual storage of all information and data. Instead of lugging around a massive playbook, go digital! The Denver Broncos have already embraced this concept by making the switch to iPads but with teams as diverse as the NFL, don't stop at iPads. Google Apps is compatible with many devices. With a Google Apps account, players could easily study film and always have the playbook on hand. Bring your team up to modern world and go digital!

Bring The Family to Every Game!
Schedules for NFL players involve a lot of travel! It may be quite difficult to include the family in every single game. With Google Apps, you can keep it personal with the built in chat, voice, and video. Want to make to make it more personal? Start a Google+ Hangout at any time and share with your family, friends, or even the world what it feels like to be on the bench!

Expand The Huddle!
What makes the NFL so popular? The fans! So why not include the fans on a huddle or speech in the locker room? With Google+ Hangouts on Air, you can streamline the motivation and victories across the world.

How Can Fans Be A Part of The Team?

Keeping Fans Informed
No matter where you are in the world, Google Calendar users can access and view their favorite NFL team schedules.  Not only can they view the schedule of games, but fans can see real time scoring updates on each calendar event!

To access this important information, simply click on the drop down arrow next to 'Other Calendars' and select 'Browse Interesting Calendars.'  Next, at the top of the screen, select 'Sports.'  From here, you want to click on 'Football' and then click 'National Football League - NFL.'  Scroll down until you find your favorite team and click on 'Subscribe' to the right of the team name.  Your favorite NFL team or teams games will now be scheduled on your Google Calendar!

HAIL TO THE REDSKINS!!! 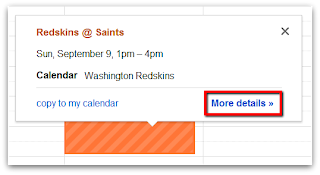 What is NFL Football season without a little bit of friendly trash talk among fans & friends?  With Google+, you can create circles and invite your fantasy football league members, family, and friends to join so you can trash talk directly to them!

This can be beneficial if you are involved with multiple fantasy football leagues/teams and you don't want Aunt Maureen (even though she is a Dallas Cowboys fan) to see how you talk to your friends during fantasy football season.  You may not get invited to the next family get together :)

Make 2012-2013 the best season yet by being part of the team! Both the NFL team and the Google Apps team. Also, don't hold it against Ditomite Matt for  being a Redskins fan :)